I Can Engage Publics Me

This summer, I’m enrolled in one summer school as a student, and in two as a teacher. (The term ‘summer vacation’ is not one which applies to PhDs as far as I know.) This week, I’m a student: today is day two of the TORCH Public Engagement Summer School, which is intended to teach us how to communicate better with, among others, you who are reading this. So we are all sitting in classrooms right now typing away: we have just been given a WordPress crash course and the folks from the summer school are really keen to find out how good we now are at pressing words. 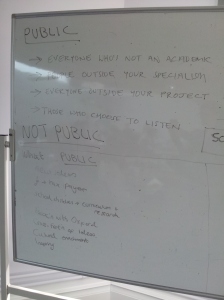 Who are ‘the public’? And who are not? Yesterday, we concluded that potentially everyone could be considered as a member of ‘the public’. Except your supervisor, perhaps.

So here are a few highlights from these past, packed days:

The summer school has an ultimate, higher purpose: on Friday, we are expected to pitch an idea for a public engagement project ourselves. I’ve been thinking quite hard about this. Which part of my research is the most awesome? How would people like to engage with it? It’s a bit hard when my own research is about other people’s public engagement! One idea I’ve had so far is to create a MOOC, a Massive Open Online Course (such as can be found on Coursera), on literature and science. Would there be any takers? Please let me know in the comments.